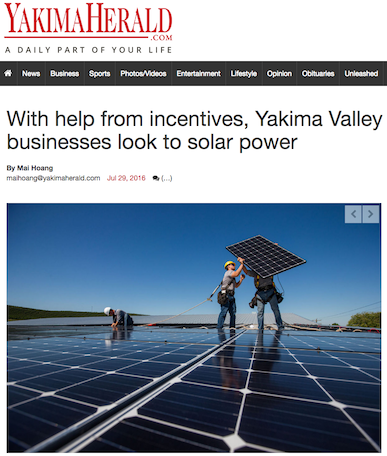 Solora Solar was featured last month in the July 29 issue of the Yakima Herald as the newspaper called attention to the growing number of small businesses making the move to solar electricity in the Yakima Valley.

The report highlighted Solora Solar’s success with bringing solar to commercial businesses as well as Solora’s upcoming commercial project with Green Acre Farms in Wapato, Wash., which promises to be one of the largest solar projects of any kind in central Washington state. That project is projected to save the company up to a half a million dollars over the next 25 years.

The article highlighted the fact that commercial installations account for about 25 percent of Solora Solar’s business and that, nationally, commercial power accounts for about 15 percent of all solar power currently generated in the United States.

Quoting Solora Solar owner Syed Mujtaba, the report noted that the increase in commercial solar installations has been driven by the lower cost of solar panels, the increased efficiency of these panels and the numerous incentives and tax credits available to businesses who act now.

“All that adds up,” Mujtaba told the newspaper.

Attention Solar Customers: We’re In This Together