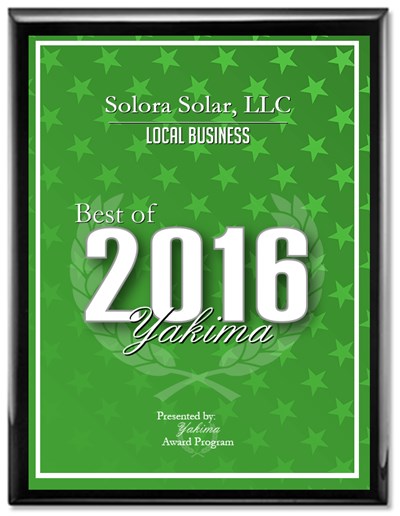 Solora Solar won the 2016 Best of Yakima Award honoring the best local businesses in the community, it was announced last week. The 2016 Yakima Award Program chose Solora Solar as one of a select number of companies who demonstrate “exceptional marketing success in their local community” and “service to their customers and our community.”

“These are local companies that enhance the positive image of small business,” the Yakima Award Program said in a statement. “These exceptional companies help make the Yakima area a great place to live, work and play.”

The program analyzes information from both internal and third-party sources to determine annual winners in various categories, identifying Solora as a winner in the Local Business category for 2016.

“Recognition is given to those companies that have shown the ability to use their best practices and implemented programs to generate competitive advantages and long-term value,” the award statement said.

Solora has won a number of awards for excellence, also being recognized as a Top 10 solar contractor in Washington state by Solar Power World multiple times.

The 2016 Yakima Award Program officially announced Solora Solar as a winner of the 2016 Best of Yakima Award for Local Business on Dec. 8. Solora Solar is owned by Syed Mujtaba and serves the entire state of Washington from its Yakima and Issaquah locations.

We Love Staying In Touch With Our Customers